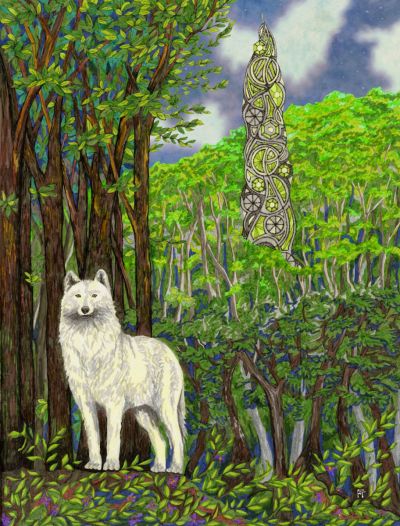 Keeping a personal secret in the darkness of war is perilous, as secrets know the path to the light. Under the influence of a mysterious observatory, a high commander with the ability to see the hand of Death keeps his secret under the cloak of dreams and visions until he realizes, at great cost, that Death doesn’t take sides.

Liros awoke in the clutches of a recurring nightmare. As a white wolf, he saw through the eyes of a child. Drop the candle and run, run on bare feet, so quietly. The dream hovered in his body, his visceral identity and sense of self, an experience as vivid as waking life. Not quietly enough.

Surrounded. Warm tears fall into the open arms of the eternal Void.

As his consciousness returned, the feeling in his heart stood in anguished contrast to the well-built outpost where he lay, in the pre-dawn, surrounded by the watchful eyes of warriors. They called it Fentalon, named after a war god of the North with the head of a wolf. To Liros it felt like a prison.

A candle flickers out against the cold, damp earth.

He closed his eyes and exhaled as the miasma of his circumstance gathered around him. His fading dream darkened it like a bright light casting the long shadow of a crag.

The roar of the river hides the cries, the truth, even as it weeps.

He made a decision.

“DeathSeer” is included in Wizards, Woods and Gods, a collection of twelve dark fantasy tales exploring the mysteries of the Otherworld through tree and animal lore, magic, cosmos, love, war and mysticism.