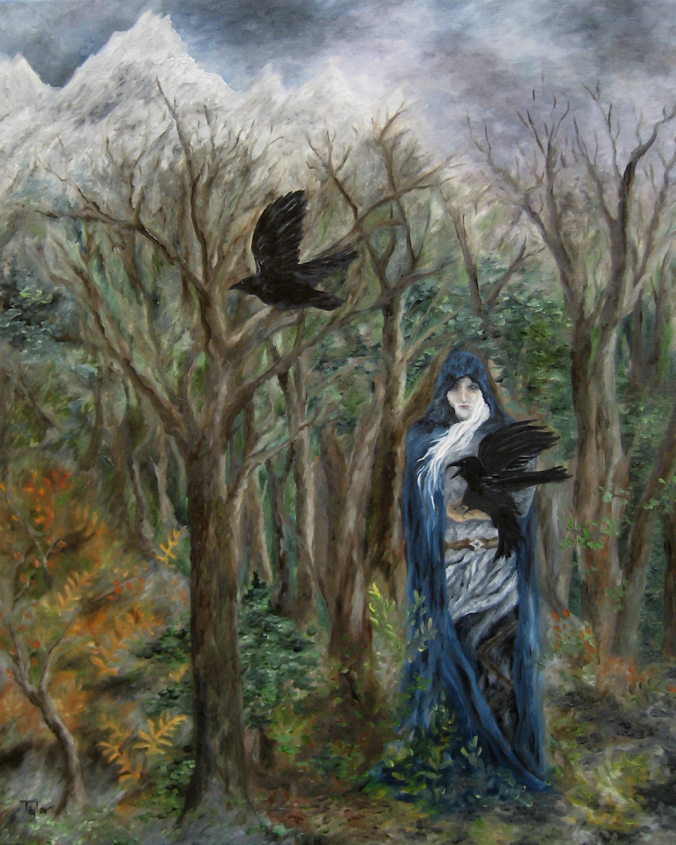 The Norse deity Odin has many names that reflect his nature as warrior, magician, poet and shapeshifter, among other things. Complex and notoriously fickle, he acts on his own terms and it’s best not make assumptions about his favors. He appears in this painting with his two ravens, Hugin (thought) and Munin (desire) which fly over the land and tell him of all they see and hear. The title of Raven God is interesting, as ravens are both tricksters and harbingers of war.

Outpost, Book One in The Fylking. Woven with Norse mythology, swords and sorcery, this story takes place in a war-torn realm that contains a portal to the stars. The Otherworld beings who built it brought their gods with them. We know these gods as the Norse pantheon, the gods of the Vikings. But these beings haunt many worlds, not just Earth. Odin, in keeping with his nature, appears in this story at strange times and in strange ways, leaving our protagonists to wonder what he is and whose side he’s on.

If you’re into science fiction, check out “The Eye of Odin.” This is a short story about a warrior with a turbulent ancestry who gets on the wrong side of an interplanetary military contractor called Odin Systems. They modeled their headquarters and inventions after Norse themes from ancient Earth history. But they are dealing with forces bigger than technology. Verses of Odin’s saga are woven into this story in relevant places, shadowing events.