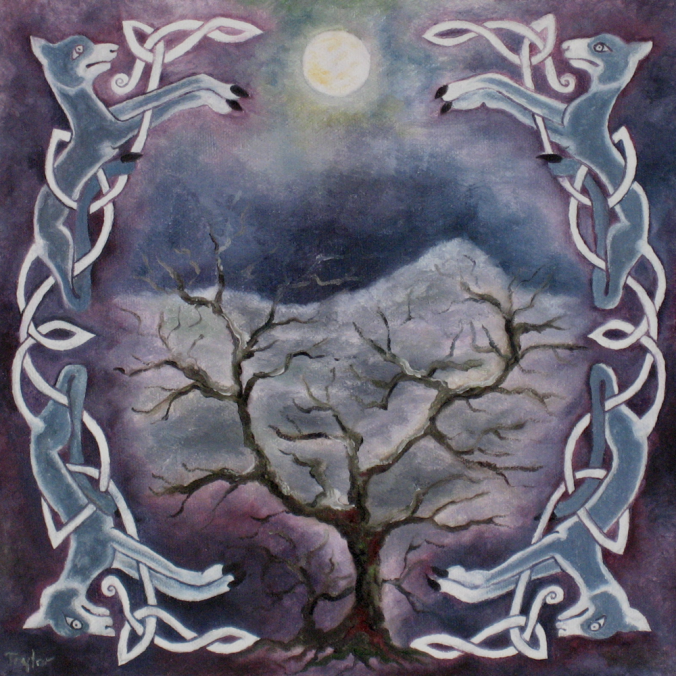 In the north where I live, light in the wintertime is precious. The days are short and the sun hangs low, making it feel like afternoon or evening even in the height of day. The shadows have a long, abiding air about them and the warmth of the sun feels strange, not quite real. Shining brightly, it paints stark white lines on the sleeping trees, brings color from the gray and glitters on the snow and ice. Wildlife responds to the scant warmth with gratitude.

The Otherworld is near. 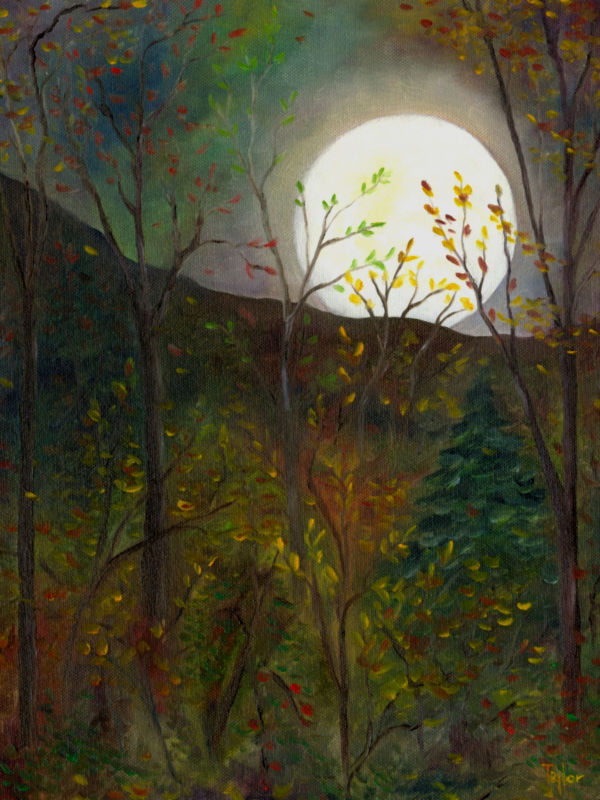 Frost moon is a Norse name given to a full moon in November. The moon is particularly beautiful and mysterious this time of year, when the leaves are in color, the branches are bare and the winds are cold. A while back I was moved to capture this in an oil painting.

Tonight, we’re there. It’s supposed to snow in my neck of the woods so I might not see it…but I’ll feel it. Wherever you are, enjoy.

Pale as the moon casting amethyst and indigo shadows,
Distant as a dream, yet close as light,
A mountain shines through the whispering boughs of a twilit wood. 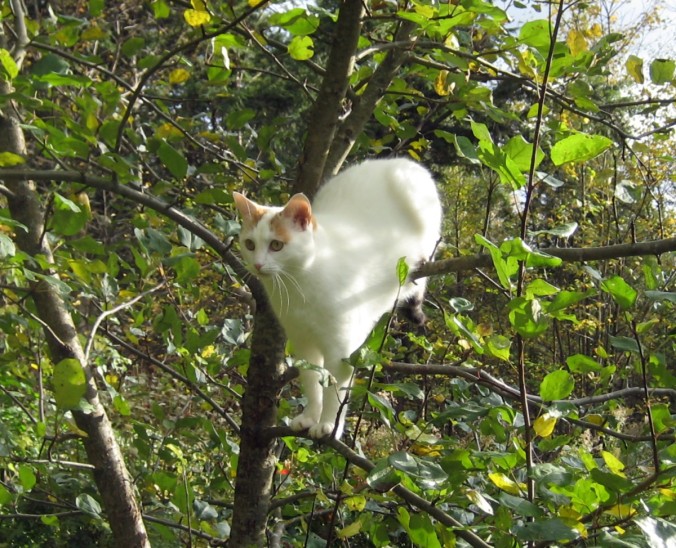 Oona in the Apple Tree

Ahh…cats. A writer’s best friend. Splendid traits aside, it’s always best to remember that cats are, at the end of the day, predators capable of wicked things indeed. I live in the woods; I have three cats that are prodigious hunters and one that can climb thirty feet into a tree without catching a breath. There is nothing romantic about this, even to a seasoned cat lady. I’ll spare you the horror stories. 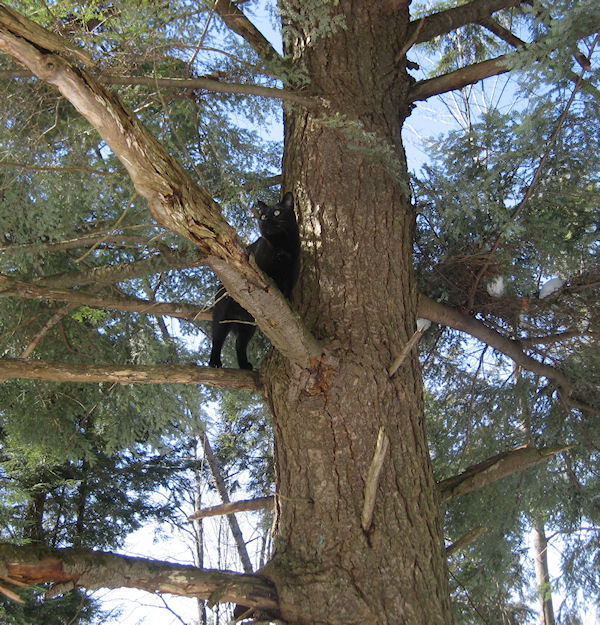 This spring, a robin built a nest in a beech tree by the house. It’s a beautiful thing. From the windows we can hear the chicks twittering and rustling around in the nest. As they’re being fed, they make a lovely, hopeful sound rich with the sort of high-pitched frequencies to which cats are particularly sensitive. In this picture you can see one of the chicks at the top of the nest. It was difficult to get a good shot without doing something obnoxious involving a ladder. I didn’t go there. The adult robins yelled at me from the trees as it was. 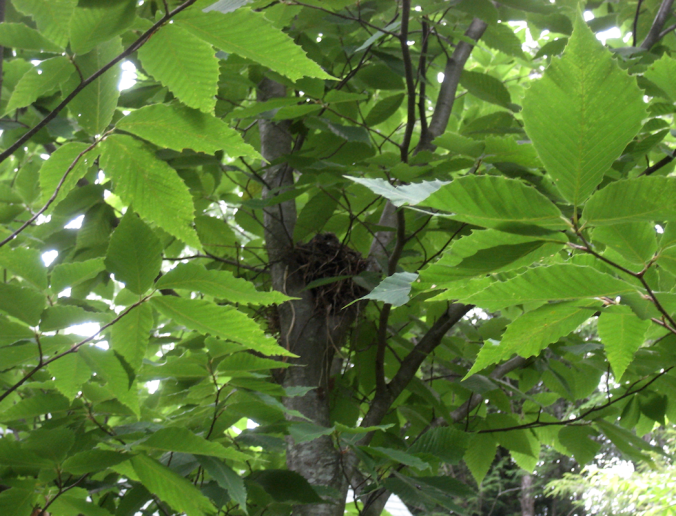 Robin’s Nest in the Beech Tree 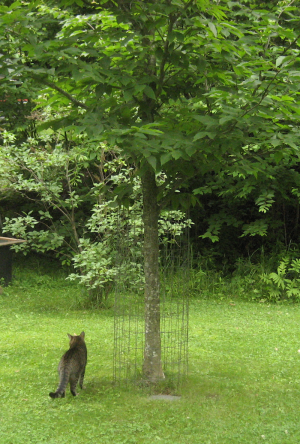 Needless to say, these little beggars were in serious danger (again, speaking from experience, here) so we had to do something. An old tomato cage and a wire cutter did the trick. I have affectionately dubbed this the “Cat Thwarter.” (Yes I made that word up but it works: something that thwarts.) Here it is, with my cat Hemlock lurking in flagrante delicto nearby. Stars shine in the dark as the moon looks away.
Away, disinterested.
A sword will cut the fair
And call it love.
Love, forsaken.
Come to my hand as a shell washed upon the sand.

From The Riven God, Book Four in the Chronicles of Ealiron.

By sun and stone, by fog and sky,
By night the winds come singing;
By dawn the robin’s joyful cry
Shall join the bluebells ringing.
Fair, the Maiden’s feet upon the dew.

From out the fields of amber green,
Beneath the low sky raining,
A wily stag her heart to tame,
Her wildness changed to yearning.
Breathlessly, the violets face the sun.

Columbine, to draw her near,
Goldenrod, to find her;
Myrtle blossoms she holds dear,
Hawthorn blooms will bind her.
Velvet red, the petals of the rose.

When the sun’s crown rules the skies,
Grapes ripening on the vine;
The stag shall look with longing eyes
Towards the harvest time.
Fear not, the twilight’s strange disquietude.

The raven does not mourn the night,
Nor wolves the kill’s last breath;
The owl, she revels in her flight,
The stag, his ancient death.
Tears of blood fall sweet upon the stone.

From “The Fifth Verse.” In this story, an ancient immortal entity defies the rules of her kind by falling in love with a mortal warrior, an indiscretion that leaves her grieving, pregnant and dependent on the help of a wizard whose army was responsible for the death of her beloved. “The Fifth Verse” appears in Wizards, Woods and Gods. 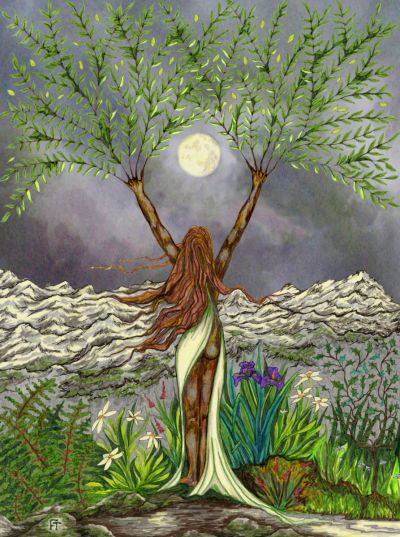 Things aren’t always what they seem. Perception creates reality. But there are rules, such as the linear progression of seasons or the natural and unquestioned confidence one has in the solidity of things. One woodsman falls in love…and the rules change.

He had built this path to the top of the hill where he had first seen her. She had appeared over the grass like a sunrise, walking slowly, her eyes as dark as the night with a tawny star in the depths, her skin the color of the earth and her hair a tangle of moss and roots, reddish and wild, like her. Together they had planted a grove, when the meadow rippled in the wind and birds fluttered and chirruped among the brush and flowers. They had dug the holes for the trees with their bare hands and gently placed the seedlings in. They had smoothed the path by walking to the stream with a fat clay jug, returning to the grove and watering each tree with a jugful, one at a time.

She sang to the trees, the dark-skinned girl. He remembered her voice, rich and full of subtleties, as she stood in the sun with her brown breasts bared and her arms and fingers splayed like the branches of an ash, her voice spiraling into the sky. Underneath the warm green moss, silence loves the water, she would sing. High above the cool blue wind, sunlight loves the air.

He had lain with her, and made her a woman.

He did not yet understand what she had made of him.

This story is included in Wizards, Woods and Gods, a collection of twelve dark fantasy tales exploring the mysteries of the Otherworld through tree and animal lore, magic, cosmos, love, war and mysticism. 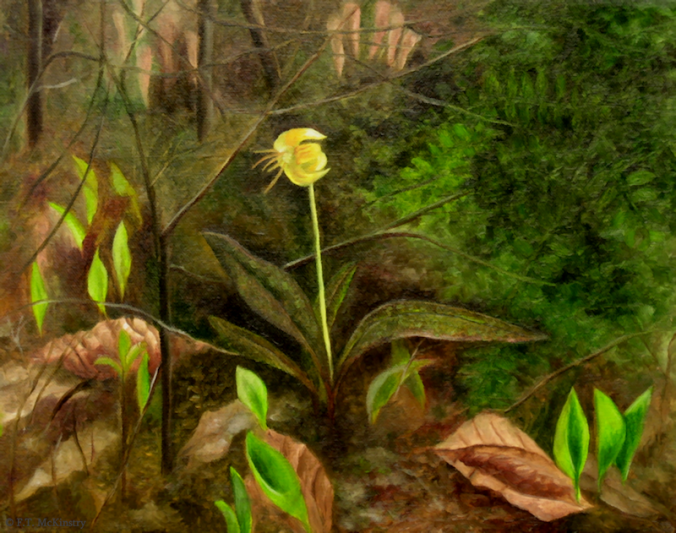 Spring flows through the cold
Softening, awakening
Tangled branches twine
Like nests
Reaching for the sun
Rivers break their icy bounds
And bathe the land in fluid song
Beech leaves rattle amid
Heavens of buds
Gazing down like stars upon the earth
Dark, damp and fragrant
Mayflowers rise through sodden leaves
Ferns spiral forth
And woodland lilies grace the dark with light 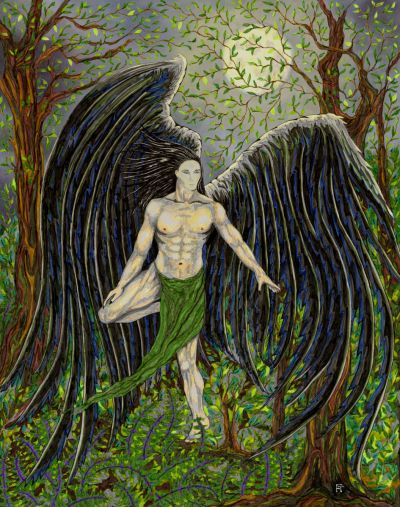 It is never a good idea to anger a wizard. One witch causes enough strife to provoke a powerful mage to summon an immortal hunter after her. But when she plumbs the utter reaches of her skills as a shapeshifter to elude the hunter, she discovers the value of her own humanity.

Shapeshifting was Oona’s life, a fluid existence she preferred to humanity. As a human, she would have avoided anything to do with the Master of Straif. A wizard of the deep flowing waters, the hollows of the earth and the implacable forces of blood and transformation, he had one black boot in the shadows.

And he loved his crow.

Oona, on the other hand, found the raucous creature too tempting. Tawny, lithe and driven by the lust of spring, she slipped around the eastern wall of the castle and climbed the spiky old hawthorn tree that grew there.

Most humans knew better than to cross a wizard. A cat did not care.

She landed with a soft thump in a bed of periwinkle. The crow called to the dawn. Nice of him to give her something to head for, though she would have smelled him easily enough without the noise. She crept on her belly through the shadows of lupine spires, tulips and daffodils until she spotted the bird on his perch above the crabapple tree. Fluid as sound, she changed.

She landed with a graceful flutter in the tree, a beautiful female crow with glistening black wings and a song for the male on his perch. He knew enough to be wary of her instant appearance in his domain, but curiosity distracted him. In that instant of miscalculation, Oona drew close and returned to her wildcat shape to finish her wicked deed. It ended quickly.

“Eating Crow” is included in Wizards, Woods and Gods, a collection of twelve dark fantasy tales exploring the mysteries of the Otherworld through tree and animal lore, magic, cosmos, love, war and mysticism.

This story inspired one of the scenes in The Winged Hunter, Book Three in the Chronicles of Ealiron. 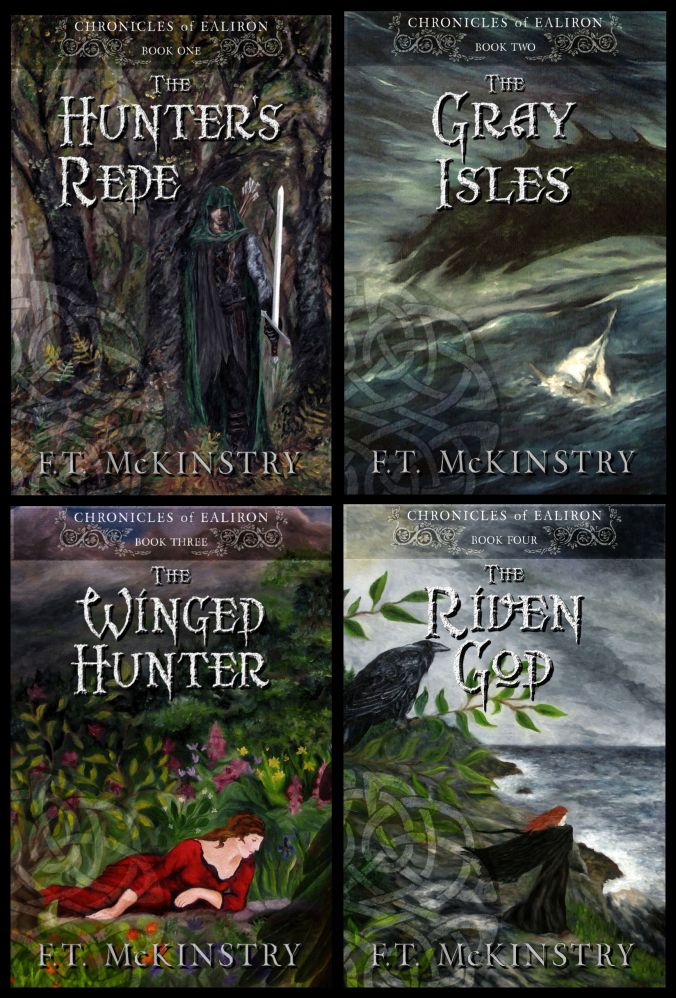 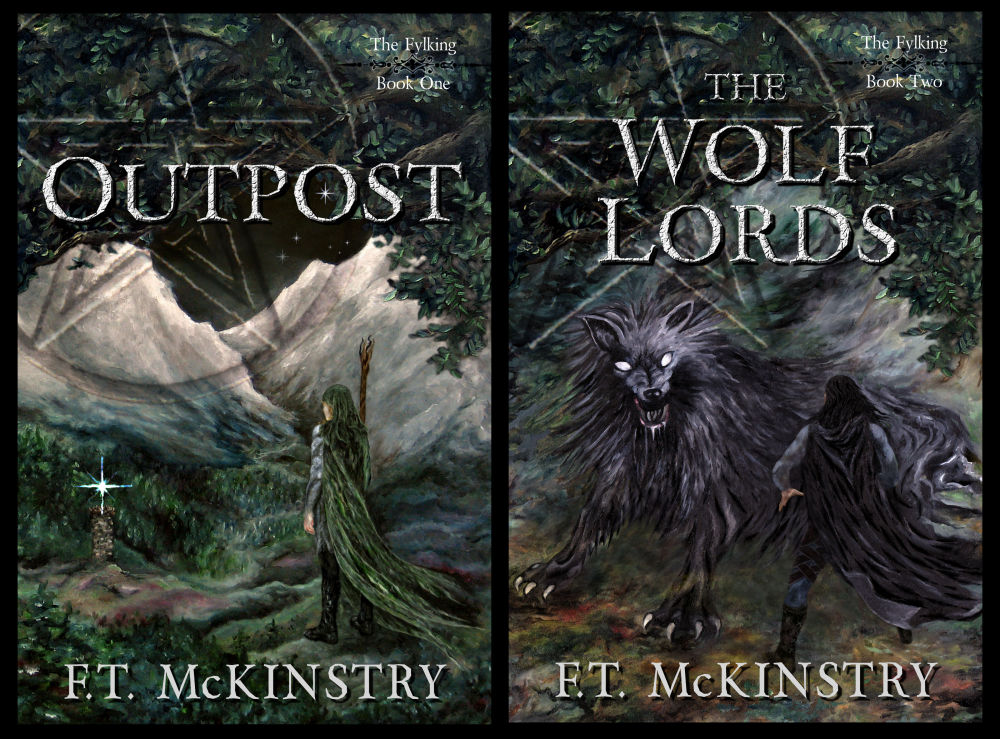 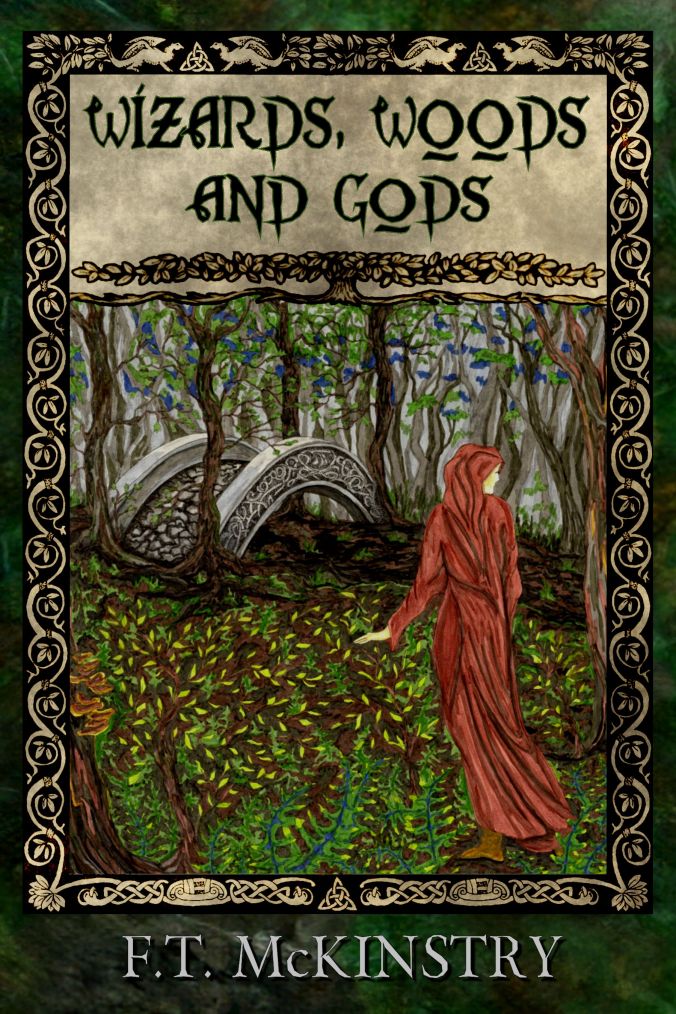 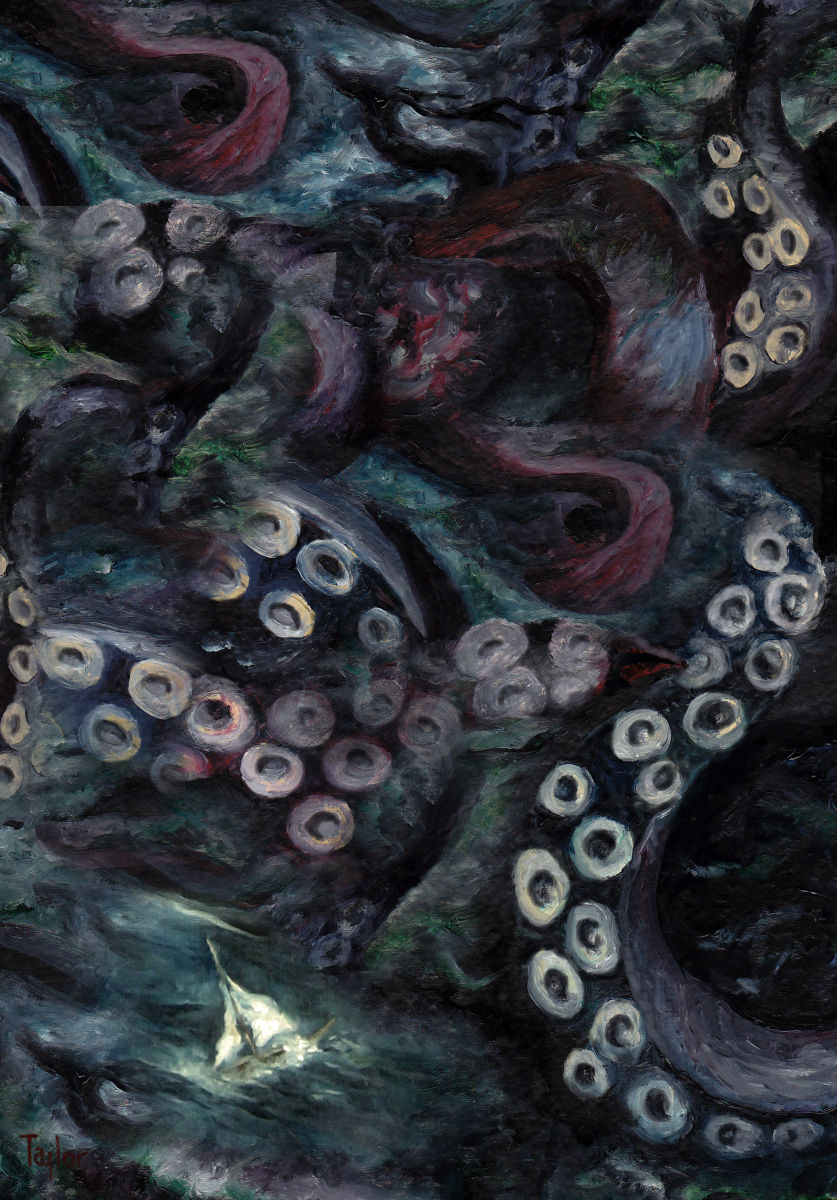